Here’s Who Wins the November Election

Cantankerous, divisive, even violent—choose your adjective, but the upcoming US election is on a level we haven’t seen in a long time. Even on my own street there are strong feelings on both sides, and a third side that is simply trying to stay out of the line of fire.

Who wins? Well, believe it or not, I already know the answer to that…

There are a lot of ways this election could go, but let’s look at the three most likely outcomes, and the impact each might have on citizens and the markets.

Nobody is declared the winner on November 3, and it becomes clear it might take a while.

This scenario leaves everyone—citizens, investors, even other countries—in limbo.

Some politicians and pundits on the left have already promised that if Trump wins they will contest any close result. Maybe even if it’s not that close. And Trump himself has said he’ll do the same thing if Biden wins and the count is narrow.

Whenever the final tally is known, the likely reaction is that it gets contested. Only a landslide victory by one side or the other would diminish the odds of it being challenged.

Some polls indicate the Democrats are likely to get a “clean sweep,” meaning they win the House, Senate, and presidency.

According to Goldman Sachs, if this were to occur the Democrats would likely pass at least three major pieces of legislation, all of which would include huge amounts of fiscal stimulus: 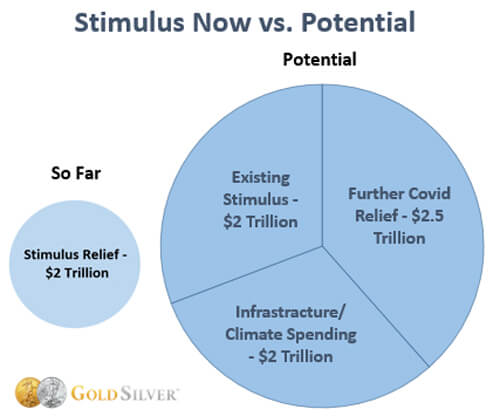 That graph is to scale; the amount of spending in this scenario would be at least 225% more than what has already been implemented this year. And it excludes the reconciliation bill.

Whatever is carried out in this scenario, it would all be done via currency printing, and automatically lead to even larger deficits.

Impact: Big and multiple stimulus programs, with knock-on effects of inflation fears and US dollar devaluation.

And the Winner Is…

There is one clear winner in each of the three scenarios above. I’m sure you’ve figured it out…

Could there be a negative outcome for gold? Sure… the price rises in anticipation of turmoil and the turmoil is less than expected. Or maybe if Biden wins but Democrats don’t sweep the house. Or maybe if Trump wins decisively and further fiscal stimulus is contested or below market expectations.

But even not knowing the outcome, I will sleep just fine: I own a very meaningful amount of physical gold. Mike says he sleeps better, too, owning gold.

In the big picture, gold is about more than the election of course. In fact, history shows that political events like elections tend to have a transient effect on gold price.

As Credit Suisse pointed out in a recent analyst report, “What matters more, structurally, is US real rates, inflation, and the US dollar—all of which are currently supportive of higher gold prices.”

The Fed itself has done everything to demonstrate its desire for higher inflation. You’ll recall that Chair Jerome Powell unveiled a policy in August that will not just tolerate higher inflation but seek a rate above its 2% target. Sooner or later they’re likely to get it.

In other words, the fundamental reasons to be overweight gold at this time in history are much more critical than the US election:

All of these are still in play (and you can probably think of more), and all are fundamentally positive for gold.

In my opinion, gold’s time is here. Not just for “election protection” but for big and critical reasons that seem destined to make it the next financial bubble. In other words, not just purchasing power protection but huge profit potential. Corrections notwithstanding, this upcoming election cycle, the next four years, could see a gold (and silver) run like history has never seen.

If you’re looking for a financial “sleep solution,” as well as the asset most poised to rise in the environment ahead, buy physical gold and physical silver.

That’s how Mike and I and many others plan to be “winners” not just during the election but for the foreseeable future.