The big story in Q3 was the sharp reversal in yields, along with a rising US dollar, both putting downward pressure on the gold price.

This quarterly ITV report briefly examines the performance of gold and other major asset classes during the third quarter and year-to-date, along with a review of the conditions that could impact the precious metal in the final quarter of the year.

After rebounding in Q2, the gold price succumbed to the pressure of sharply rising Treasury yields in Q3, when the Fed began talking about tapering asset purchases

After losing 40% in Q2, Bitcoin rebounded to lead all comers. Commodities also did well, along with oil and the US dollar. Broad stock markets were weak. Silver and palladium basically crashed.

Gold was flat on the year, until Q3 hit.

Crude oil, Bitcoin, and commodities are the 2021 leaders so far, along with U.S. real estate. The broad stock markets are up on the year, and the USD and inflation remain elevated.

Gold and silver are currently down on the year, not unsurprising given its typical inverse relationship to the stock market. Palladium and platinum logged their fifth straight monthly decline due to the semiconductor shortage that’s curbed auto production. Palladium recorded its biggest monthly drop in 13 years in September.

Q4 could be interesting, as uncertainty remains surrounding inflation, central bank tapering, and lack of political progress on the U.S. debt ceiling and infrastructure bill. 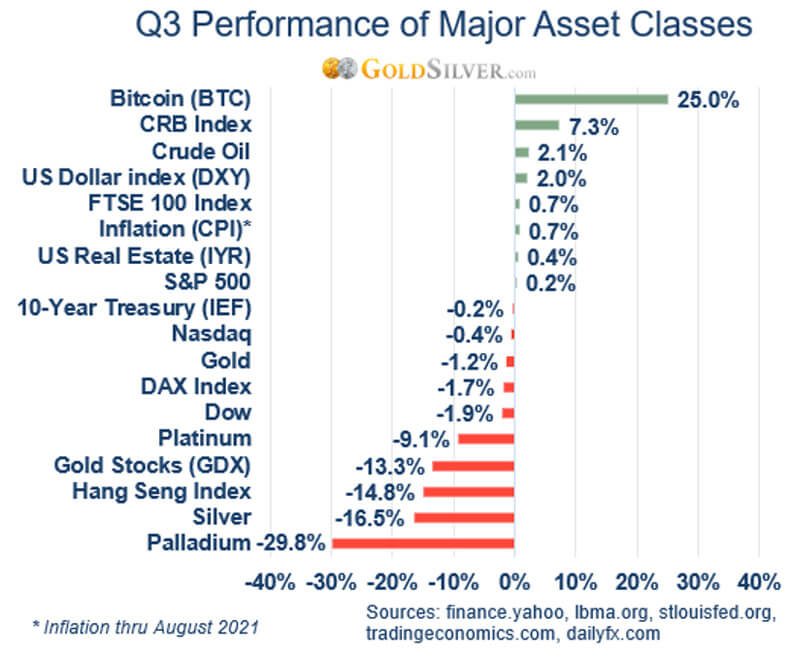 We remain in unchartered territory. The world is still trying to exit a global pandemic, while high inflation and political friction persist.

Will Inflation Prove Transitory? Core inflation rose 3.6% in August (most recent available) from a year ago, the biggest jump in more than 30 years, since May 1991. According to the Commerce Department, supply chain disruptions and unusually high demand were largely to blame for ongoing price pressures. The 24.9% increase in energy prices didn’t help, either.

The question, of course, is if high inflation prove transitory—or not. Fed Chairman Jerome Powell admitted that persistently high inflation readings are “frustrating.” White House economic adviser Jared Bernstein said inflation is “likely to stay elevated longer than previously expected.” And after its September meeting, the FOMC revised its estimate for the Personal Consumption Expenditure (PCE) inflation rate, now projecting it will come in at 4.2% for 2021, a sharp upward revision from June’s projection of 3.4%. Bottom line, the transitory question is still open.

Persistent high inflation is present to the Euro zone as well. Consumer price inflation in the 19 countries hit 3.4% in September, from 3% a month earlier, the highest reading since September 2008. High energy prices and supply bottlenecks are again blamed. It looks likely to jump higher still, as supply-chain disruptions are reported to be worsening. The ECB is sticking with the message that it will quickly pass, though ECB President Christine Lagarde publicly admitted to higher than expected inflation risks.

Yields: Treasury yields have spiked, mostly due to central banks announcing they may begin to ease monetary policies. Both the 10-year and 30-year saw their largest quarterly gain since March, and the two-year logged the largest three-quarter gain since 2018. The Bloomberg Global Aggregate Index, a benchmark for government and corporate debt, has lost 4.1% so far this year, the biggest slump for any such period since at least 1999. Whether central bankers actually begin to scale back bond buying remains to be seen, but Fed actions will clearly have an impact on the markets including gold.

Debt Ceiling: As of this writing, no agreement has been reached on the debt ceiling. U.S. debt is closing in on $29 trillion. Roughly $700 billion has been incurred since President Biden took office and chose Yellen to head the Treasury, and the budget deficit through the first 10 months of the fiscal year stood at a whopping $2.71 trillion.

With a potential default looming, Treasury Secretary Janet Yellen said she would like to see the power over debt limits taken away from Congress. A bill introduced in May would repeal the national debt ceiling, and when asked if she would support it, Yellen said “yes, I would.” A lack of resolution on the debt ceiling would have tremendous impact on the markets, with gold serving as a strong hedge.

Housing: Rising home prices in many parts of the developed world continue to pinch buyers. A recent University of Michigan consumer survey said buying conditions for housing are now at their lowest level since 1982.

U.S. home prices, as measured by the S&P CoreLogic Case-Shiller National Home Price Index, rose a whopping 19.7% in the year ending July, the highest annual rate since the index began in 1987. Apartment rents in the U.S. were up 11.5% compared to last year, while some cities in Florida, Georgia and Washington saw increases of more than 25%. Similar gains are reported in other countries. A reversal in the real estate market would likely push investors to gold.

Oil: The oil price normally falls when the U.S. dollar strengthens, but that correlation has not recently held. Brent crude touched $80 a barrel last month, for the first time in nearly three years. This pressures American exporters, as they’re hit with the double-whammy of higher fuel costs and a stronger dollar. How this plays out will continue to impact markets, including gold.

China: Evergrande, one of China’s largest real estate developers, has, so far, failed to address two bond interest payments. Its mountain of debt is a real concern; it admitted it might default if it can’t raise money quickly. Some analysts don’t exclude the possibility of it morphing into a Lehman Brothers moment for the country. Mattie Bekink, China director of the Economist Intelligence Unit, admitted that “the impacts from a large default by Evergrande would be remarkable.” The lack of full transparency doesn’t help.

Meanwhile, the world’s second-largest economy faces other concerns: a resurgence in COVID-19 cases, power rationing in major provinces, a slowing economy, and a fall in real estate sales and new constructions. All this while inflation remains stubbornly high. Gold could serve as an effective hedge to any significant fallout emanating from China.

Black Swans: Given the plethora of unresolved issues surrounding most economies, the current environment remains ripe for a significant, unforeseen event. Another shock to the global economy or markets would underscore the importance of gold’s hedging abilities.

The most likely path ahead is one where gold continues to offer a meaningful and necessary hedge. We cannot rule out another set of record high prices in the next run.